skip to main | skip to sidebar

A fun day at the ballpark 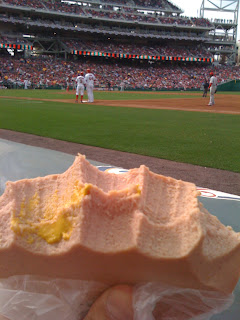 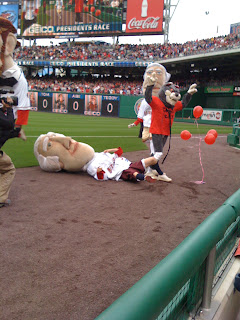 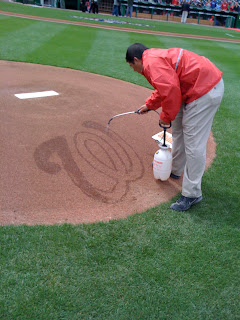 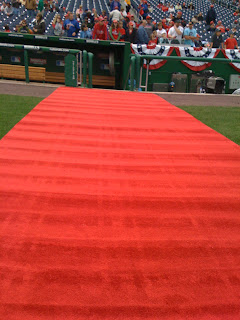 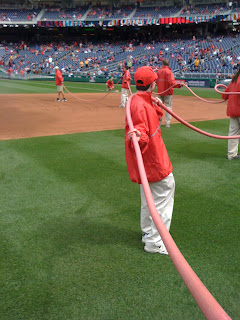 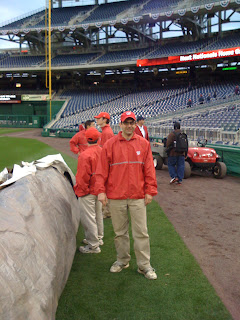 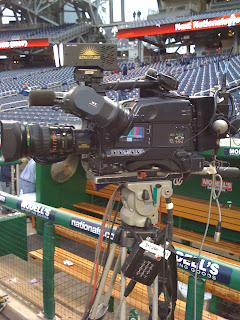 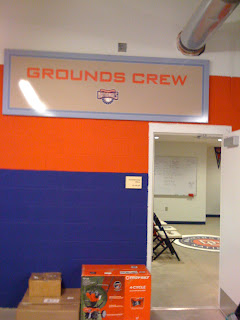 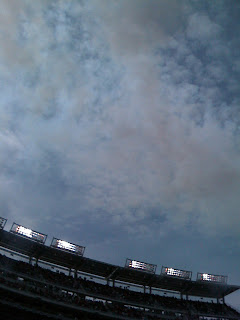 r. I had the privilege of working on the grounds crew today -- something that I've been doing once or twice a month for several years and enjoying immensely.

Each time I work a game I get to the stadium two hours early, help with batting practice and field prep, and then sit in the front row and watch the game.

If it doesn't rain, I get a gorgeous fun day at the ballpark. If it does rain, I'm screwed, and I have to drag the tarp out to cover up the field and then wait for the rain to stop and drag that tarp off the field. And if the rain starts again . . . .

Today the Nationals hosted the World Champion Phillies and we did something unusual during pre-game prep. After clearing the batting practice equipment and watering the infield, and "painting" a curly W on the back of the pitcher's mound (using water), we actually put down red carpets.

The picture here is the carpet I rolled out and staked into the ground in front of the Phillies' clubhouse.

As they all ran out, all I could think was "please don't trip on my carpet." Thankfully, the stakes held and I didn't cause a freak injury to a franchise player.

Pre-game I also got to chat with David Gregory, who I used to know as "Beth's husband," but now must be described more accurately as the host of NBC's meet the press. He's a huge baseball fan and was very excited to serve as master of ceremonies for the game. He did a great job.

Unfortunately, we observed two separate moments of silence. One for Angels' pitcher Nick Adenhar who was killed this past weekend by a suspected drunk driver. The other for longtime Phillies broadcaster Harry Kalas, who died after collapsing in the broadcast booth before the game.

Once the game got going it was a high scoring affair. Guzman went 5 for 5 and Adam Dunn hitting his first home run as a National. (Did you know that since 2004, only Alex Rodriguez has more total home runs than Dunn?) The Nationals scored 8 runs.

Unfortunately, the Nationals made somewhere between 3 and 5 errors and left the door open for Ryan Howard to hit a 3 run homer and the Phillies won the game 9-8.

After the game ended I was tasked with running out to pick up second and third base.

Also, because rain was in the forecast for tonight, after the game we actually got to roll out the tarp. That is pretty rare for me -- I have never had a rain delay on a day that I've worked.

Anyway, dragging out the tarp is a stinky messy fun job and after we stretched out the tarp we staked it down to keep it from flying away.

Lastly, in case you are wondering what the picture is top left, the crew is allowed to bring food in, and most of us do, since we're at the stadium for 6 hours or so. What you see depicted is something that I bought for my father in law during his recent visit. I should have thrown it away when he left without eating it but, well, let's just say it was a bad food choice for anyone, and leave it at that.

All in all, an excellent fun day made even more fun by it being a weekday. Best of all would have been if the Nats won. But that's the thing about baseball -- there's always more games to look forward to.
Posted by Bart at 9:03 PM

What a cool thing to get to do! Thanks so much for sharing pictures.

(I still can't figure out what the unidentified food is)

Very interesting Blog. I had never read anything about grounds crews before. Might make an interesting book. (Baseball books ALL make money.)

I hope that sandwich didn't kill you.

It was food but it wasn't a sandwich. The first person who successfully identifies it here wins a better lunch, on me.

Is that deviled ham?

I'm thinking it's some sort of disk made out of hotdog meat? I've never been to D.C, and I think I'll keep it that way if that's the kind of food available, lol.

Not spam - wrong shape. I'm going with a hunk of bologna with some mustard.

Your lunch look like a huge slab of bologne unsliced. Whatever it was, I hope it tased better than it look.

Looks like just a think cut of bologna from the deli counter to me.

Is it a slab of bologna with mustard?

looks life a package of bologna with mustard in the middle

Nicole is the winner! It was a big chunk of unsliced bologna from the deli counter. I bought it for my father in law when he was visiting and when he didn't get around to eating it. I could bring myself to throw it out. So, I brought it to opening day. My stomach still hurts a little bit when I think about it.